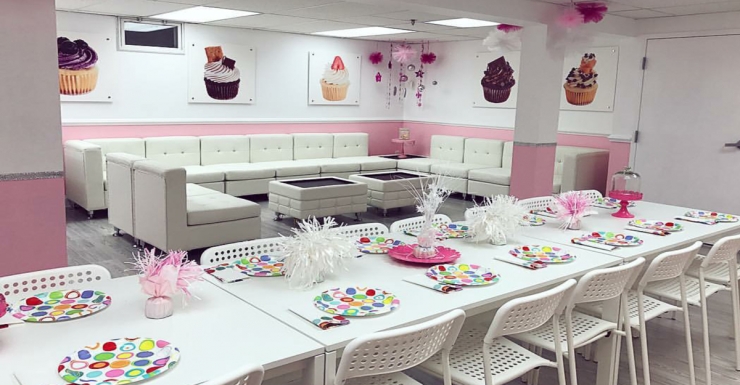 What do you do after you've conquered the cupcake world and risen to the top of the cake plate? You set your sights on the kids' birthday party universe, of course. Kara Schnaidt (aka the cupcake queen who launched her mega-successful line of sweet treats from her mom's kitchen when she was just 18 years old) is doing just that … and her not-yet-opened party studio is already selling out.

Even before Schnaidt opened her Kara Kakes shop in Franklin Lakes in 2015, she started doing fun cupcake-decorating birthday parties in the front of the store. But party demand has shot up so much that she's taken over another space in the same shopping center to focus solely on events. "It really belongs in NYC," Schaidt says of the whimsical-meets-glam pink-and-white Kake Studio that officially opens on January 21. "It’s just gorgeous and something you can’t find anywhere else. It’s much larger than our first space and it is dedicated to just birthday parties and classes."

Within a week of posting the news to Facebook, she's gotten more than 20 parties booked and says the most popular package is the two-hour Ultimate Decorating Birthday Party, which offers a lesson along with both cupcake and cookie decorating. But there are plenty of other options too, from the shorter, 75-minute Classic Decorating Party to a Girl Scouts-focused package tailored to the meeting badge requirements, to a Cupcake Wars-style competition, to a party geared towards adults (because Moms need cupcakes too!). Schaidt recommends booking a couple of months in advance since she's already scheduling parties for March and April.

To kick things off, Kake Studio will be offering free cupcake and cookie decorating and an ice cream sundae bar at their grand opening party from 12pm to 3pm on the 21st with a meet-and-greet with Elena from Bella Princess starting at 1.

A princess and free cupcakes? 2017 is looking better already.