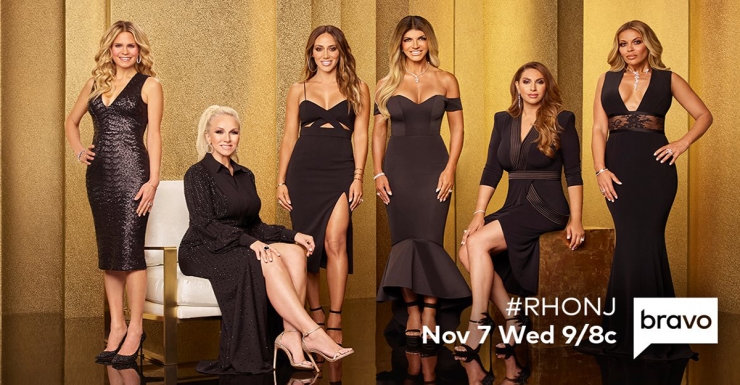 Good news, “Real Housewives of New Jersey” fans: The show is returning on November 7th for its ninth season. Last season was pretty action-packed (but aren’t they all?) with some over-the-top trips to Milan, Italy, and Boca Raton, Florida; Teresa dealing with running her household while it’s husband Joe’s turn to go to prison; and, of course, tons of blow-out fights, including yet another epic restaurant one, where glassware ends up being the real victim.

You can expect plenty more juicy Jersey drama this season too as Melissa finds out some serious secrets about her father; Teresa enters a bodybuilding competition against Joe’s wishes (but when your husband’s in jail, can’t you kind of do what you want?); Dolores deals with being an empty-nester; and Margaret gets in over her head as a bridesmaid in Danielle’s wedding.

Look for some new faces on the scene this season too including Jennifer Aydin – who hits the ground running by calling out Margaret for the affair that ended her first marriage. But one of our favorite newcomers is Bergen County’s own Jackie Goldschneider, who’s already making news for taking on tough girl Teresa. The Tenafly resident is a real estate attorney-turned parenting writer and a mom of four – including two sets of twins all under the age of 10. So yeah, she has her hands full ... but she never had a doubt she wanted to be a Real Housewife. We talked to Jackie about her time on the show, how her family felt about the experience, if she walked away with any new friends (or enemies), and why she is ready and excited for newfound fame ... and Andy Cohen.

Was this your first time being part of a TV show? What was it like?

I did one episode of “Open House New York” like 10 years ago but other than that this was my first time on TV and I absolutely loved it. think I was born to be a Real Housewife. I love giving my opinion, which is why I’m a newspaper columnist. I’m really into female friendship and so everything just came together naturally.  It was very organic and I really had a very, very, positive experience.

What did your family say about your joining the RHONJ?

My husband at first was a little nervous about it. But he ended up really loving it. My kids were beyond excited. And they loved the whole process. They loved filming and they are really excited for the show to air. My parents were super excited.

So were they all on the show too?

They weren’t in it an overwhelming amount but they were definitely in it. Family is a big part of the Jersey franchise and I’m really, really proud of my family. As long as my kids were comfortable with it and said yes. And I always asked them first. If there was anything they didn’t want to do, I would never let it happen but everything that we did was what they wanted to do. Everything we did with my husband, he was into. I never forced anything on anyone. Everyone was really happy with it.

What surprised you most about being part of the series?
Based on what other people said going in when I was considering the whole thing, I expected a nasty, negative experience and it could not have been further from the truth. I expected, based on what other people said, to fight with my husband. We both loved it. It sounds cliché to say that we came out stronger on the other side, but we really are so excited about everything. It bonded us in a way. We have this thing in our lives that we didn’t have before. It’s so much fun.

Did you make new friends?

With Margaret we went in as friends of a friend. We knew each other and we were friendly but we are very, very close now. I became very good friends with Melissa. She’s a very close friend.

Was there any weirdness as the new girl?

There wasn’t weirdness on my end, but without naming names I would say there were certain people who weren’t so happy to see new faces around.

How would you describe your role on the show?

I think we’re all smart. But maybe I was the academic one. I was very free-spirited. I don’t know. I think I’m really fun. I have big reactions to things but in a fun way, not in a yelling kind of way. I try to have fun with anything.

Do you think life will change for you after the show airs? Are you prepared for everything that comes with fame?

Inside of my home, I don’t think my life is going to change. I’m a really devoted mother. I always have been and I can’t imagine any dynamic with my children changing. I’m still going to be mommy and they’re still just going to be my babies. Outside of my home, I am so excited to be famous and I have no shame about it either. I’m going to be one of those people who takes a picture with everyone who wants it. I just have like this excitement inside me and I always have. I always let it out through my writing and I’m excited to have another outlet.

Was there anything you didn’t like about being part of the show?
I don’t think there was anything I didn’t like. Probably scheduling-wise, really trying to make everything work. At the end of the day I still came home and did my kids’ homework with them. I packed their backpacks. I went to their school meetings. I got them dressed in the morning, I went to the supermarket four times a week. I was still doing all of that stuff. I don’t have an overwhelming amount of help. Both sets of our parents are great but they don’t help us with the kids. Probably what I disliked the most was trying to navigate my way around all of that.

You’re mom to two sets of twins. What’s that like?

I love it. I would have had 100 children. I am very open about the fact that I had fertility issues so this is the result of five rounds of IVF. I had trouble getting pregnant with one so to end up with twins twice, there’’s no other way to think about it then it was meant to be. I love it. If anyone can handle it, it’s me. It worked out well. God gave it to the right person.

How did you balance everything during shooting?

They say if you want to get something done, give it to the busiest person in the room, because you know how to make time for the things that are important to you. You just shift things around. I spend 95 percent of my day being productive. The three biggest things in my life are taking care of my family, writing, and the show. So those three things I’m passionate about. It doesn’t feel like an overwhelming schedule. It feels like doing things I love.

What do you love about living in Bergen County?

I live in Tenafly. I love New York City and Bergen County is so close to New York City. There are great people here. It’s a very pretty community. I have great neighbors. I have a lot of friends here who I really adore.

You’ve said you have concerns about raising your children in a privileged home. How come?

I have seen in my adult life what happens to people who grow up with too much and too little motivation. So one of the things I try really hard to do is not to give my kids so much that they lose motivation to work hard for themselves.

Your children are watching everything you do so be a good role model.

Is there anything from the show that you’re not proud of?