What’s In This Mom’s Bag 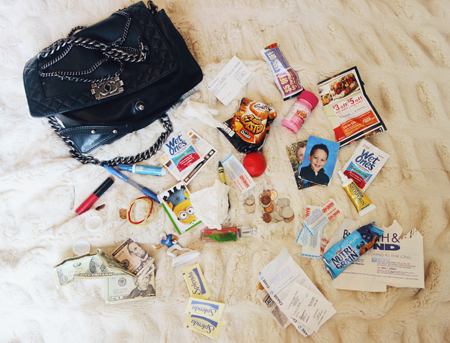 A popular tabloid runs a feature each week called “What’s in My Bag?” where a celebrity supposedly pours out her “tote” (that’s what celebs carry – totes) and highlights her favorite things from a mix of perfectly curated and organized items.  They’ve always got things like a chic lip gloss, a trendy moisturizer, yummy whole grain treats and pedicure socks, etc.

And every week I feel pretty bad about myself, because the inside of my bag looks nothing like that.  If you poured out my bag, you’d get some cool items but they’d be mixed in with a pile of garbage accumulated by the constant needs of my kids and the crap they throw at me to hold all day. In fact, I don’t know any suburban mom with a few kids whose bag looks like the ones in the magazine. And I’m not saying every mom is a slob like me, I’m just saying that if you emptied a real mom’s bag, it would probably look more like mine. So let’s play the real version.
What’s in my bag? Prepare for a sh*# show…

1.  Lots of hard crumpled tissues:  You’ll probably find 3 or 4 of these hiding out toward the bottom, because when my kid sneezes, half his brain comes out of one nostril.  Without tissues on hand it’s either going on his shirt, my sleeve (or in a pinch I’ve wiped with a receipt). And since there’s usually no garbage nearby, it gets crumpled up and goes back in my bag.  Old tissues are also good for when kids want to spit out the gum you just gave them after they begged for it for an hour.

2.  Old busted up snacks:  Sometimes, as we’re running out of the house, I’ll throw in a little healthy snack incase hunger strikes my little one while we’re out. But then he’ll say “I’m starving” and I’ll go load him up with a bucket of chocolate ice cream and forget the organic bar I packed until I find it in a desperate search weeks later.  So you’ll definitely find a crushed bag of goldfish and a crumbled Nutrigrain bar in that hot mess of stuff. But on the plus side, you can totally hide behind a tree at the park and dump the snack crumbles into your mouth to salvage it. Not that I’ve done that. Not recently.

3.  Tons of coins: Because when my kid wants to buy something, I’m usually grabbing my change and running out the door after him or being screamed at to “open it already!”  So by the time I pay I’m a frantic mess and that change just gets chucked in there. And I still can never find a quarter at a meter.

4.  Loads of expired coupons: because I clip them and then I’m too tired to look for them by the time I’m done shopping.  Except those Bed Bath & Beyond coupons I hoard, because every mom knows they never expire.  And tons of receipts, since as noted, they’re good for wiping noses.

5.  Wallet size pictures of my first kid: (and maybe the second kid, but definitely not the rest) from the days when I actually cut the wallet sizes up and gave them out. They’re floating in the sea of crap as well.

And what else? Random action figures, hair bands, baseball cards, notes from school, bottle caps and all the other junk my kids toss at me with a “here mom” or just leave behind for me to pick up (which I must do to avoid the inevitable “where’s my minion toy” meltdown later).

So am I really a total mess or are the famous people out there fooling us all with fake bags? Maybe I’m actually not as different from these celebs as I think.  After all, you’ll totally find some great lip gloss in my bag too.

It’ll just have a piece of fruit roll up stuck to the side.