Inflatable Destination Jump On In Opens in Bergen (Dedicated E-mail) 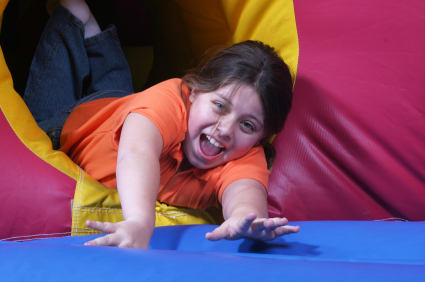 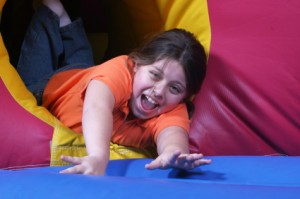 Remember that scene in Mrs. Doubfire, when the kids are jumping and flinging themselves on the furniture, dancing on tables and the goats are eating the birthday cake? It seems it wasn’t long after that inflatable parties became all the rage. Coincidence? We think not. Birthdays and bouncing… seriously, does it get any better?

Which makes the opening of Jump On In in Hasbrouck Heights all the more bouncalicious. Started in 2005 as New England’s first and largest indoor inflatable and jumping facility, the franchise has expanded to several states, providing a safe, private space in a fun-filled environment that allows children of all ages to enjoy an athletic, active party on inflatable equipment and trampolines. The newest location, in Bergen, is a veritable jump-filled paradise- in a massive built out space filled with equipment which caters to all ages, from wee ones up through tweens.

Party packages range from small groups to up to 25 kids, 1.5 to 2 hours. Pricing is flexible, including everything from pizza to balloons to goodie bags. Or – feel free to bring in your own cake and snacks. Either way, the staff will not only supervise your young ‘uns, but they’ll clean up the mess afterwards – leaving you to focus on packing up gifts (including your blissfully wiped out children) and get home so you can jump into bed for a decadent afternoon nap.

And that’s not a bunch of hot air.