Flywheel Set to Open in Englewood 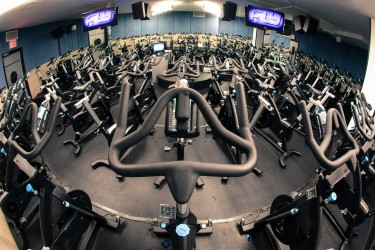 You see them, bands of cyclists, in official regalia and gear.  They bike with abandon, wind through their hair, owning the road.  You, behind the wheel of your spacious, kid-friendly, 5-star-safety rated SUV, dream of a day when you can join them, hit the road, and keep up with them.  But how?  When? (glance at the thermometer), uh, definitely not now.

Well now you can virtually hit the streets Flywheel style.  A pioneer in the boutique spin studio business, NYC-based Flywheel, with their modern, plugged-in, studios and hip, buff, motivating instructors, is about to bring their game to Englewood.

We chatted up co-founder and spin rockstar Ruth Zukerman to find out how the Bergen outpost will stack up to their other locales.

BM:  “So what made you decide to open Flywheel in Bergen?”
RZ: “Well, we have so many Englewood residents traveling into the city for classes already, it was kind of natural.”

BM:  “Tell us about the studio, the layout, and the feel.”
RZ:  “This studio will be a replica of our others, with stadium seating, custom engineered spin bikes, all hooked up to our system so that riders can see their unique performance data on in-house flat screens and compete for positions on the leader board.  That’s what makes it fun and challenges people.”

BM: “Where will the instructors be from?”
RZ: “Instructors will be from NYC studios, the Millburn location as well as local areas.”

BM: “So can we expect to find you on a bike?”
RZ:  “I’ll probably be there to teach some of the preview classes.”