5 Things to Expect at the New American Dream Mall 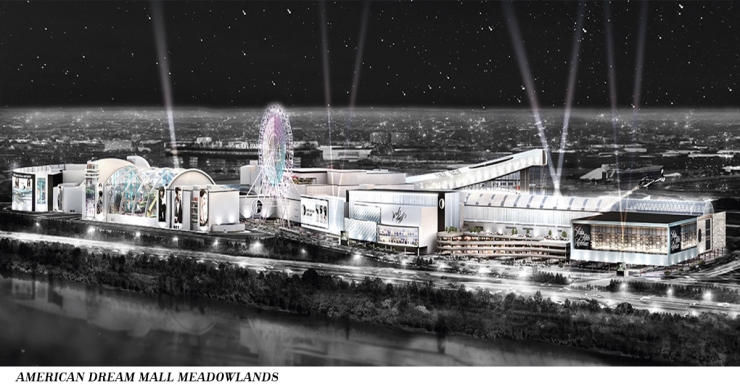 As is often the case with the real-life kind, the massive mall version of the American Dream can, at times, elusive and unattainable. That’s because the $3 billion (!) bananas shopping, dining, entertainment complex (dubbed, in fact, American Dream) has had its opening date pushed and pushed ... and pushed. It actually broke ground waayyyy back in 2004, changed hands multiple times during the downturn and re-emerged a few years back with a new owner and an opening date of 2017 ... then 2018 ... and now March 2019.

In addition to promising it’ll be ready by next spring (we’ll see), the folks behind the complex recently revealed a little more info on what expect for the first time in a while.   (You can catch up on what’s already been announced -- like that fabled indoor ski mountain and 4D movie theater -- here.) Read on for the latest and greatest planned additions what’s slated to become one of North America’s biggest and baddest malls.

While there’s been lots of buzz around family-friendly activities ranging from an aquarium to a water park to Nickelodeon Universe, sounds like there are some very grown-up offerings on the horizon by way of 20,000-square feet dedicated to "health, wellness, beauty, and spa facilities that invigorate and pamper the weary shopper.” And hopefully the rest of us as well.

Restaurant news has been trickling in since the beginning but they’re now saying the venue will house a whopping 100 eating establishments spread out over a mega food hall (complete with a cooking studio and pop-up eateries), along with 20 full-service restaurants.

There’ll be some seriously special shopping.

In addition to mall staples you’d expect like Saks, H&M, and Zara, American Dream will be home to up-and-coming designers and first-to-market concept stores that literally won’t be anywhere else. Sounds good to us.

You can have a sleep over.

Look for a luxury hotel with 800 rooms when it’s all done, which will be attached to the convention space and is supposed to include even more restaurants.

It’ll be a tech-savvy experience.

The place says it will focus on providing modern consumers a technologically enhanced experience including providing visitors with smart bracelets that will allow you to stay connected to your kids no matter where they wander. There will also be alternate reality experiences throughout the entire complex and “evolutionary and revolutionary displays” in the mall’s center courts. We’ll admit we don’t know what that last part means, exactly, but perhaps that’s what makes it so darn revolutionary.