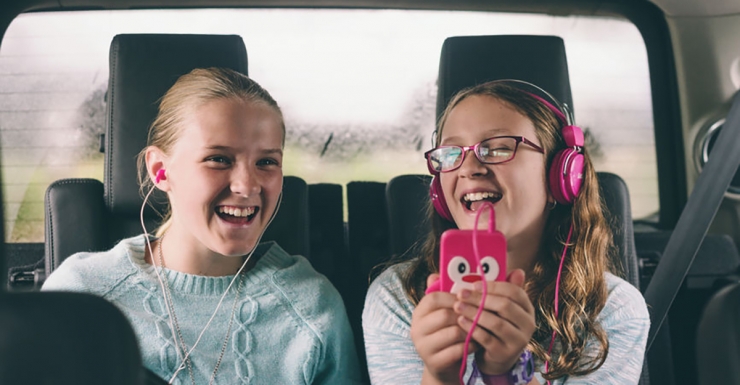 That summer road trip is sneaking up on you and you know discovering new music on Spotify isn’t enough to end your boredom with the tunes on your playlist. What will you do on the endless trip to Grandma’s or the beach? Well, we’re here to tell you that podcasts are the mommy blogs of 2018. So why don’t you jump on the bandwagon and give a few of them a try? Here are suggestions for 10 podcasts to listen to on your next roadtrip. Because it’s gotta be better than listening to Kidsbop while cooling your jets in Parkway traffic, amirite?

Five for the Parents:

Note to Self – This terrific podcast examines our relationship to technology. It was talking about Cambridge Analytica before Cambridge Analytica was cool (or terrifying). And please, if you listen to nothing else, listen to their episode about Black Mirror. In addition to their weekly releases, Note to Self has also done some special projects including The Privacy Paradox, Bored and Brilliant and their latest, No Filter in which they interview women from different walks of life about how they own their online selves.

The PopCast with Knox and Jamie – Coming at you from Birmingham, Alabama this dishy little podcast covers everything entertainment in an insightful and often sophisticated way. They are especially fond of The Bachelor. With a motto like “Educating you on the things that entertain, but do not matter” these two old friends gab and spar and when they agree, they react with delight and amazement. Start with the Summer Movie Preview. Also, if you’re a Bible fan, check out their second pod, The Bible Binge in which they break down one of the stories in the Bible then cast it with the actors they believe fit each part.

What Fresh Hell – You know when you and another mom friend get together for coffee and you end up doing a deep dive on something that’s been on your mind? This is that conversation without being tempted by the delicious looking scone at the coffee shop. Recent episodes have covered topics as varied as Tweens (Episode 51), Let’s Not Care About What We Weigh (ep.49) and Bedtime Routines (ep. 31) and earned hosts, Amy Wilson and Margaret Ables the Best Podcasting award at the 2018 Iris Awards.

Happier with Gretchen Rubin – You totally know Gretchen Rubin. She’s the happiness guru who wrote the books The Happiness Project and Better than Before. And now she’s hosting Happier, a podcast in which she breaks down happiness and advocates for good habits with her sister, Elizabeth Craft, a television producer based in Hollywood. Start with Episode 54 or Episode 106. Both are anniversary round-ups of the most popular tips and favorite moments. Bonus: Elizabeth and her writing partner, Sarah Fain, have started a second podcast, Happier in Hollywood, a survival guide for staying sane and productive in LA.

By the Book – You’re all for as much self-improvement as you can get. But who has time to figure out which suggestions work and which don’t? Uh, Jolenta Greenberg and Kristen Meinzer have the time. In fact, in each episode, they choose a self-help book and then commit to living by all the rules and every single recommendation to figure out whether they might be life changing. Know what’s really life changing? When someone else does all the work and you reap all the benefits!

Five for the Kids:

But Why: A Podcast for Curious Kids  - Do Fish Sleep? Why is Milk White? How does your heart work? If you’re tired, exhausted really, by the unrelenting questions posed by your offspring, give Mr. Google a rest and let the But Why podcast help you out. Record your child’s question with the memo function or an audio app on your smartphone, then email it, along with your child’s first name, age and town to questions@butwhykids.org, and the good folks at the podcast will seek out the experts who can help tell your child what they want to know. But Why heads to the New England Aquarium to tell us all about fish, to a farm to answer the milk question and then speaks with a pediatric oncologist answers the questions of the heart.

Story Pirates - Story Pirates started in a school auditorium in Harlem when a group of improv comedians put on a sketch comedy show inspired by stories written by kids. Since then, in addition to the podcast, they’ve launched a radio show and a sold-out live tour . Often described as “a mix between School House Rock and Monty Python,” the story pirates podcast adapts stories written by kids into sketch comedy and musical theater. Kids can submit their stories by going to their website.

Dream Big – When Eva Karpman and her mother, Olga, were looking for podcasts featuring inspirational interviews with incredible people who are living their big dreams, they found few. So, they decided to make one for themselves. Eva has scored some great interviews with people like, Chris Hadfield, an astronaut and YouTube sensation, Nicholas McCarthy, a one-handed concert pianist, and Vanessa Van Edwards, a behavioral investigator. Eva and her mom want kids not only to dream big but to take massive action to make those dreams come true. Seems like a lot of us could use Eva’s advice!

What if World -  One day, after a really good sneeze, Mr. Eric found himself in What if World. He made it back, but he still visits What if World to get the answers to kid’s questions. If your kid has a question like, “What if ninja turtles could fly and birds could cry?” or “What if unicorns turned to rocks when they’re shy and a magical fairy came and didn’t make unicorns shy (and aliens controlled us like puppets)?” call and leave a voicemail at 205-605-WHAT and your child’s question could be featured on the show.

Saturday Morning Theater and the Radio Adventures of Doctor Floyd – You’ll get villains, mysteries, westers, superheros and exciting close calls in these two podcasts. Both have tons of episodes to choose from. Best of all, each episode is only around 10 minutes long. Perfect for short attention spans!